On the evening of Wednesday, May 28, over 200 people, nearly half of them Queens–based members of Local 79, filled the Insulators Local 12 Hall for a rally in Long Island City, Queens. The Build Up New York City (BUNYC)-sponsored event was held to mobilize community members to ensure that the Astoria Cove Project, a project that includes three tall waterfront towers and two inland towers, will be built union. The developer, Alma Realty, is seeking to rezone the property and BUNYC is demanding that the rezoning language includes guarantees that the proposed project will be responsibly built. Local 79 wants to give a special thanks to NYC Council Members Costa Constantinides and Jimmy Van Bramer, both of whom spoke in favor of BUNYC’s goals, as well as to all the Local 79 members who came to the rally.

Local 79 members, especially those who reside in the neighborhoods represented by Community Board No.1 are strongly encouraged to go to the following two meetings to make their presence felt and their voices heard:

Both the hearing and the meeting will be held at Astoria World Manor.

Members who reside in neighborhoods represented by Community Board No. 1 can call Steve Andujar at 646-628-2899 for more information. 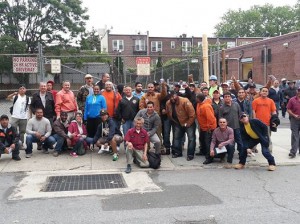