The Mason Tenders District Council and the NYC Building Trades endorse Jumaane D. Williams for NYC Public Advocate. Robert Bonanza, Business Manager of the Mason Tenders’ District Council of Greater New York/Chair of the MTDCPAC, and John Hutchings, Director of the NYS Laborers’ Organizing Fund PAC, issued a joint statement: “Jumaane Williams has proven himself time and time again to be a friend of the men and women who build this city. We saw him do that numerous times during his time as chair of the Housing and Buildings Committee, most notably with the passage of his Intro 1447, which requires all workers to have safety training that will assuredly save lives. In the face of fierce opposition, Jumaane pushed this bill through the City Council, and that’s just what we need in a Public Advocate: someone who is not afraid to push back and do the right thing in the face of fierce opposition. We proudly endorse Jumaane Williams for Public Advocate.”

Dozens of Local 79 members stood behind Jumaane Williams on the steps of City Hall as he announced his candidacy for Public Advocate. Anthony Williamson, Local 79 Organizer and Auditor, spoke in support of Jumaane and said Local 79 is ready to hit the streets to get him elected. “Jumaane is the people’s candidate. He has been a fighter not for one person, but for the entire city. That is why he has our support.” 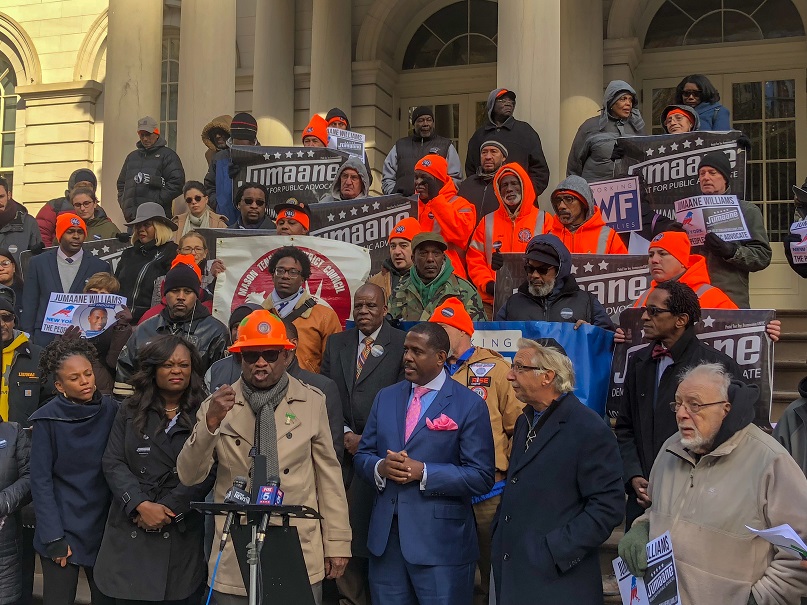