Hundreds of Local 79 members joined thousands of workers from various unions to celebrate May Day 2015 with a rally that began outside billionaire Walmart owner Alice Walton’s home. After a spirited march, marchers assembled to listen to numerous labor leaders speak from a stage about the continuing struggles of working people in an economy that has seen the largest share of income go to the 1%. Local 79’s Business Manager Mike Prohaska delivered a fiery speech to the crowd, in which he spoke about the history of the struggle for the eight-hour day and how increasingly workers cannot provide for their families on eight hours of work. He asked the crowd how it had come to pass that hard-working people had to work two or three jobs, and how corporations could pay their workers so little that the government had to provide taxpayer money to aid the workers. “We do not simply ask for dignity, fairness, and justice for all American workers, we demand it,” Prohaska said in closing. The crowd roared its approval and shouted in unison, “Si se puede! Si se puede!.” 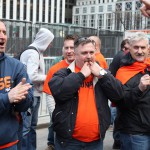 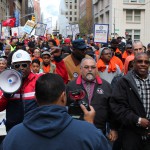 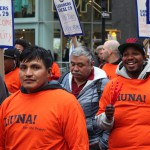 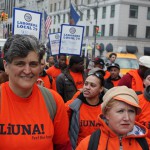 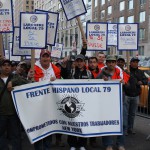 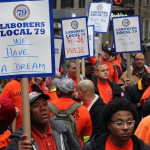