Mike Prohaska opened the Forum by thanking Local 79’s immigrant members for their contributions to Local 79, to New York City, and to the United States. Terry O’Sullivan followed with a speech in which he talked about the role immigrants played in forming LiUNA and LiUNA’s unwavering commitment to ensuring that immigration reform legislation is made into law. Senator Schumer,Congressman Crowley, State Senator Peralta and Assemblyman Moya wove stories of their immigrant heritages into their talks, all of which were about the need for immediate passage of immigration reform legislation. Both Peralta and Moya promised that the Dream Act, which would give financial aid to qualified undocumented immigrant students from New York who wish to pursue higher education, would pass in the next legislative session. Yvette Pena-O’Sullivan asked the audience to demand that members of the entire NY State delegation to the United States House of Representatives vote for the pending immigration reform legislation which has already passed the Senate. Finally, the four attorneys from Make the Road New York gave the audience practical information regarding workers’ rights, Deferred Action for Childhood Arrivals (DACA), and low-cost and no-cost immigration services available throughout New York City. Mike Prohaska closed the meeting by letting members know their voices had been heard and that Local 79 was working on ways to address the specific needs of immigrant members. 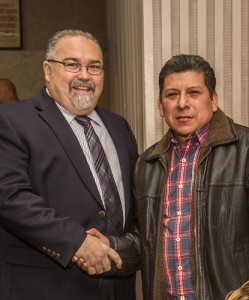