Local 79 members, dressed up in various costumes, gave an unexpected greeting to guests coming to the New York State Association for Affordable Housing’s (NYSAFAH) swanky Annual Summer Cocktail Reception at the Princeton Club on Thursday, July 24. Silenced NYSAFAH workers lay on the sidewalk, while a top-hatted, cigar smoking executive handed out free money, representing the way in which NYSAFAH contractors abuse taxpayer subsidies. Members of Local 79 passed out leaflets expressing outrage that one of NYSAFAH’s major developers would sue affordable housing homeowners who called attention to his firm’s shoddy construction practices. Other members held up checks depicting the tens of thousands of dollars that NYSAFAH contractors have had to pay to workers who have been the victims of wage theft. Inside, several Local 79 members attended the event. They were removed by security after using verbal and visual means to express their opinion of NYSAFAH’s construction practices. 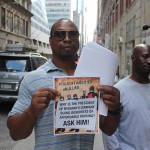 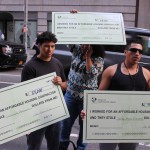 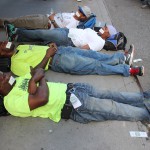