At a June 5th luncheon attended by nearly a thousand people, Local 79 member Erika Glen Byam received one of Nontraditional Employment for Women’s (NEW) Equity Leadership Awards. For over 35 years, NEW has prepared, trained, and placed women in careers in the skilled construction, utility, and maintenance trades. Local 79 has been a strong supporter of NEW, and Local 79 Business Manager Mike Prohaska was recently appointed to Board of Directors.

Ana Taveras, herself a 1995 graduate of NEW, and currently the organizing coordinator for the Laborers’ Eastern Region Organizing Fund, introduced Erika and noted that Erika had just assumed the role of Vice President in the Women’s Committee, a committee of women laborers from Local 79.  After Ana’s introduction, Erika gave a speech in which she thanked her mother for guidance and recounted her career path—a career which included time in the Air Force, retail, college, more retail, and then, the discovery of the opportunity provided by NEW to train her for a career in the building trades.  After graduating from NEW, she became an apprentice with Local 79 and is now, in her words, “a tradeswoman who helps build New York City, a city that I love.” From her first days as an apprentice, Erika has been very active in the union, attending rallies, picket lines, and membership meetings. At the beginning and end of her speech, Erika said “that you will never meet anyone like me,” a statement no one in the audience could doubt after she had told her remarkable story of how she became a proud member of Local 79. 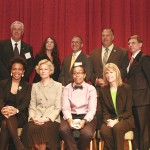 Erika with other honorees and speakers 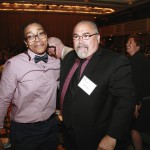 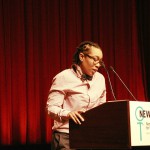